A remedy for eye strain and dry eyes

This information is provided based on my personal experience of severe eyestrain since October 2010. On 19 May 2011 I discovered the cure outlined below, and now, on 20 June 2011 I can summarise my findings so far, thus:

a) Initially the response was outstanding with symptom levels declining from at least 8 or 9 out of 10 to 1 or 2. I could barely feel my eyes. This occurred very rapidly.

b) After about 10 days, though, the efficacy of my cure started declining. Symptoms rose to 3 or 4 out of 10. I still would get days or periods with 1 or 2 out of 10, but the problem did not disappear entirely, as I had anticipated. The main thing, though, is that the burning sensation had declined. That's a big win, since the burning sensation is quite unbearable.

c) On 20 June, as I write this, some bit of clogging/ irritated sensation has come back to the eye (say, 5 out of 10). And so I'm not 100% cured as I thought I'd have been by now. Tha's a major issue. It might well be that the initial benefits came from the spillover effects of the anti-infammatory eyedrops to which the benefits of my discovered treatment added on, to create a fantastic sense of cure. I have not taken any anti-inflammatory eye drop for one month now, but if the symptoms don't reduce, I might add anti-inflammatory eye drops to the "mix" and see whether that creates a consistent 1 or 2 out of 10. To me that would be good enough as a "cure", although I'd ideally like to see 0 out of 10.

This picture (of "remedies" I used but which did NOT work) illustrates things that don't work. Don't use hot-rub. Don't use eyedrops: (Pictured) Tears Again, Polyvisc, GenTealm Viscotears, Flarex (this is a prescription only medicine anyway), Refresh liquigel, Zaditen, Maurine Revital Eyes, Tears Naturale, Optive, Visine, Systane (not pictured) or Systane Ultra, Albalon A, Antistine Privine, or Blink.

Step 2: The following remedy – "invented" by me – provides great relief for eye strain and dry eyes

The following is the refined cure (after nearly one month of trial and error) – this is an update of 18 June 2011.

There are five key ingredients to the cure: (a) aloe vera gel directly from the plant, (b) honey (ordinary honey should be fine), (c) triphala water, (d) pure ghee and (e) pure castor oil. I've got two options outlined below. The first one is the REFINED method that I now use, but below that is the previous method that helped in the initial stages of the problem. Pick the one that you think will work for you.

Method 1: Make your own eyedrops

A) Make eyedrops and apply as many times as  needed.

Step 1: Take a pinch of triphala powder (from Indian shop) and mix it in half a cup of hot water. Let it settle and cool down.

Step 2: With a big spoon, scoop out about two tablespoons of the top layer into another dish. Throw the rest away.

Step 3: Take fresh gel of aloe vera, squeeze it into this Triphala water. Let it settle. Some fragments of aloe vera will become visible. We don't want them.

Step 4: Take a spoon and scoop out about one table spoon of CLEAN liquid (i.e. without the aloe vera fragments: the gel would have dissolved in the mix by now)

Step 5: Take a little bit of hone (1/8th tea spoon) and mix it thoroughly with this liquid. That's it. These are your eyedrops! They will last  one day.

Apply these eyedrops/liquid as many times as needed during the day.

B) Massage ghee and use castor oil before sleeping

Step 1: Take a tiny pinch of pure ghee (from Indian shop) and rub in your fingers. It will melt. Apply it over the eyelids, and allow a little bit to seep inside the eye.

Step 2: Apply one drop each of castor oil into each eye before sleeping.

I used this method in the early days of the cure. I have now largely switched to the eye drops method above.

It is the 20th day (the cure was discovered on 19 May 2011). Today I've only applied aloe vera once in the morning and I've gone through the WHOLE working day (it is late evening now) without a single eye-drop of honey. [The gel contained in Aloe vera leaves reportedly comprises 75 nutrients, 200 active compounds, 20 minerals, 18 amino acids and 12 vitamins. – Source]

I've used Manuka honey but I guess this will work with almost any honey.

Wet your finger. Take a TINY dab of honey on the finger. Apply the finger on the eyelashes with eyes slightly open, allowing some of the honey to get into the eyes. This will SLIGHTLY sting for a few minutes. Within minutes you'll start experiencing relief.

In the initial days I needed fairly extensive application of Manuka honey inside the eyes, possibly four to five times a day. The eyes would water extensively, thus showing that they were being cleansed. Now, I apply honey just once a day (20th day). 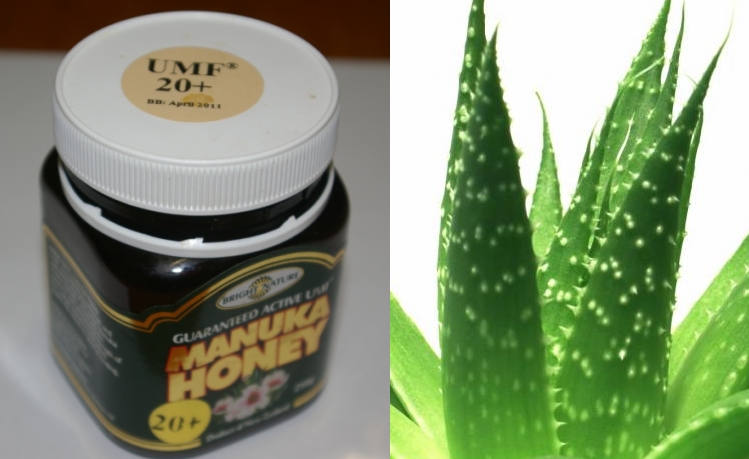 Get Dabur Triphala churan from any Indian grocery shop. Very cheap. Take a tiny pinch and mix it in half a cup of hot water. Let it cool down. Use a spoon and take a few drops and put inside each eye.

d) Apply castor oil inside the eye before sleeping

This is something I've been doing for a fairly long time, with minimal benefits. However, it does seem to soothe the eyes slightly at the time of sleeping, so I continue to use it.\

This entry was posted in Uncategorized.

15 thoughts on “A remedy for eye strain and dry eyes”